Why GDP Goes Up In Disasters

During the early part of 2020, I was walking the dog around the local oval, in smoke so thick it had dimmed the sun.  I penned a quick post on how GDP is a perverse measurement in these times.  This post expands on what I was meaning. Gross Domestic Product is the single measurement by which we determine growth.

GDP measures a basket of indicators.  These include labour, consumer goods, capital deployed.

When recovery efforts require the deployment of labour, purchase and replacement of goods and investment of capital.  GDP therefore improves immediately after the disaster.

Growth and Return On Capital

Growth in the economy is the degree to which capital accumulates a return.

Capital that grows bigger – by definition – gave a bigger return.

This newly made capital is looking for return along with the initial capital deployed.

It is “easier” to get a bigger return from a low capital base.

A disaster is a “lower capital base”.

GDP doesn’t account for growth in a year coming at the expense of our ability to produce in following years.

We have an earth overshoot day each year that shows us when we are overshooting earths ability to produce in future years.

When we overshoot – nothing is deducted from the measurement of GDP.  We are eating capital and treating it like revenue.

We are consuming biological resources as if they were infinite when they are in fact finite.

We are treating our natural capital as growing when our economic capital does.  However, the opposite is true.  We are growing GDP at the expense of natural capital.

Fortunately the conventional view of GDP is being challenged.

Some Economists are working hard on different models too.

That space that supports the inner circle and doesn’t exceed the outer circle (our planetary boundaries) is the safe and just zone for the economy.  Safety and Justice is what the Economy should produce – not just goods, services and profits. 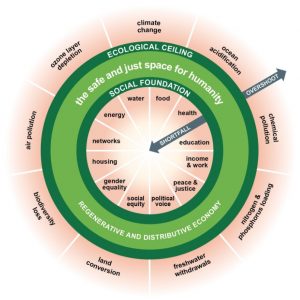 What their work spells out is that for-profit companies establish recovery efforts in a disaster for… profit.

Meanwhile the communities (or nations) affected by disasters (often broken, tortured or devastated) become customers of these for-profit companies.

Instead of being able to recover.  These communities are dealt a double-whammy.  Disaster and the economic dis-empowerment.

In a process seen time and place again all over the world.

Australia is not immune.

What I was saying is that GDP will go up, but our wealth has gone down and this is perverse.  But also the rising GDP will take money from communities and this is also perverse.

Who Owns The Recovery Matters

GDP doesn’t account for who owns what just what the ‘what’ is.

So when disaster strikes a community it is usually the incumbent small businesses that lose their capital base.   Insurance never covers everything (sometimes nothing).

It is the local business owner that sees their balance sheet go to zero.

The resulting recovery effort could be led by locals with a catalyst from outside.  However, that catalyst is often extended by “outsiders” or “government” as the only capital in town.  (Everyone else’s just got burnt).

So, the out-of-towner builds the new shopping mall.

The out-of-towner puts in the new shops.

The out-of-towners now seek to make greater returns off this lower capital base.  In essence they will extract the money from the community instead of keeping it in place.

Stakeholders With An Actual Stake

At a personal and community level we need to get a stake in the future.

Earning our stake can be done by:

If there’s capital needed in our Economic Neighbourhood, we (the locals) should be the ones providing it and benefitting from it – as well as using the services and products produced by these same enterprises.

We can thrive in Economic Neighbourhoods and become better neighbours.

With an actual stake, the communities affected by (what will be increasing environmental) catastrophe’s can be linked to any growth and lift from disaster recovery.

Want To Explore This More?

Used "ETHICAL" when booking for 20% off