by José Ramos and Meaghan Burkett

We are in the midst of dramatic industrial, economic, ecological and social challenges. The existing industrial model is failing to ensure our ecological heritage and is driving inequality. At the same time new technologies coupled with a resurgence of creative social innovations are laying the groundwork for dramatic social change. We are at a crossroads, and our choices and actions will have profound implications. Will we continue to follow down an economic cul de sac, or use the new technologies and social creativity available to us to re-make our economic system for the common good?

The success formula for industry and development over the last two centuries has been due to a combination of factors. First and foremost was access to cheap and abundant sources of energy to power production processes – a fossil fuel driven system. Invisible to this but sustaining this has been an ecological context that could absorb the punishment of such a system. In the 19th century and to a lesser extent in the 20th century with many virgin forests still standing, ocean ecosystems still intact, in a relatively stable climate, the impact and intensity of this fossil fuel driven system was buffered.[1] It was and still is to a large extent a production system that did/does not concern itself with where things go after they’ve been used, let alone where they came from. Another aspect of the success formula interacted and amplified this…  economies of scale and mass production. Use of machines and factories and the rise of Taylorism as a model for producing cheap and abundant goods. This had the dual effect of making many of those goods more affordable to the average person, and at the same time amplified the impact that these production processes would have on the natural world. Whilst this model has enabled significant industrial progress and societal benefits, it is coupled with a range of issues resulting in the following impacts.

Our current industrial system produces waste on a massive scale, with little to no capacity to reclaim the resource value of discarded goods, and with many potentially functional products becoming obsolete before they even cease to work. This has led to a global waste crisis, as megatons of waste get buried in permanent disposal sites and plastic waste swirls about the oceans, such as the Great Pacific Garbage Patch. Countries like China now refuse to accept other nations’ waste, and in general we’ve run out of “other places” to dump waste. We not only need to take responsibility for waste but find the hidden value in our waste.

With globalisation has come sprawling global supply chains that are primarily dependent on the use of fossil fuels. A significant proportion of a product’s embodied energy (the amount of energy required to produce and deliver a good) comes from transport alone. Global supply chains can also lack transparency and can remain fragile to economic shocks and disruptors such as Covid-19.

Much of our production systems grew from a legacy of cheap energy based on fossil fuels, where energy could only be produced at massive scales with inefficiencies in transmission. The impact of climate change now makes fossil fuel intensive energy production non-viable.

The impact of our industrial system is not just on issues such as climate and waste. We see upstream impacts such as the overuse of water or timber resources, downstream impacts such as pollution of rivers and oceans and cumulative effects reducing the overall resilience of natural systems. Our industrial system interacts with our ecosystem in many ways that operate outside of safe ecosystem health boundaries.

The accounting logic for our economic system has been focused on industrial output and growth, where the focus has been on shareholder Return on Investment, Return on Assets and other solely financial return indicators. This emphasised increasing production, but ignored whether this increase was actually linked to increased value, wellbeing or satisfaction for consumers, producers, suppliers or local regions. Today the economic logic of endless growth has become a major problem, while new research has shown that consumption beyond an optimum level does not even correlate to wellbeing.

The current industrial system, with the recent inclusion of artificial intelligence and automation into the production process, is one of the leading drivers of job loss, as automated processes and robotics replace human labor.

The potential benefits of production are often quick to leave a community, as production in the current system is conceived for export rather than local use. This is compounded where companies seek maximum shareholder value without a commitment to community and workers.

Ownership of large industries is centralised in the hands of a small few, who often reside outside of the region. Ownership of industries, capital and asset provides control, influence, stability and resilience. Unequal distribution of wealth and capital causes social and economic instability, erodes democratic processes and drives inequality and disempowerment of local communities.

A whole system of problems

Taken as a whole complex, this system is already experiencing problems of various types, and will likely become less and less viable with each year. In many ways the current system represents a dead-end, for our communities, our health and for the viability of the ecosystems we depend on. It is based on an extractive logic, where stakeholder interests are limited and short term-ism prevails.

Today there is an urgency for change, as our impacts on the natural world are felt everywhere, and the social problems produced by this system become more apparent. The issues we face are inter-connected. What is needed is whole systems solutions to tackle the renewal of industry and production.

The Opportunity for our Era

An emerging model exists that can promote and create pro-social and pro-economic outcomes that are distinct from the outcomes of the conventional industrial model. These are:

This model is founded on a new logic for a generative economy suited to the challenges, aspirations and opportunities of the 21st century. By “generative” we mean economic activity which minimises or eliminates externalities (negative downstream impacts) and which creates value synergies. We believe, given the challenge we face for rapid transformation, generative economic activity must be scaled for impact, and hence we retain the need for an “industrial” strategy, one which includes big industry, finance and technology, but where its combined powers are fully directed toward ethical and live sustaining ends.

New Logic for a New Economy 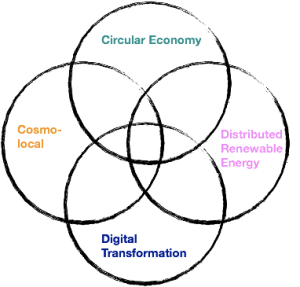 A circular economy means that we are able to reimagine waste outputs as resource inputs for new products. A number of companies have begun to take this approach, from clothing to residential products to construction. Applied across whole regions, this can create new urban and regional metabolisms that circulate value at scale.

Today we have the benefit of a “global design commons” that provides design, knowledge and open source technology from all around the world. In conjunction with this we have new small scale production technologies that can employ these distributed design resources in a localised way. This approach maximises open knowledge for local development.

We are amid a digital transformation that provides unique opportunities. Digital platforms allow for users to co-create value, share idle resources and build knowledge pools. Localised automation technologies allow for high precision production without mass scale logic, allowing for customised economies of scope. Robotics is beginning to get used to support niche and scope based production capabilities. Artificial intelligence technologies are increasingly allowing small businesses to use business service that allow them to compete with large scale businesses.

Multifunctional design and integrated use

Valuing the hidden and undervalued

New value measurement techniques and mechanisms can more adequately account for positive value and negative value from industry. These include total value capture, ecological valorisation, social valorisation and indicators such as return on resources and product to non-product ratio. As information symmetry increases the value of inherently extractive industries decreases while the value of inherently regenerative industries increases.

Knowledges related to production and industry exists across many cultures, disciplines and groups. Harnessing multifaceted knowledges is crucial in developing new, scalable approaches to production that express generative characteristics, reduce and eliminate externalities, and drive value synergies. We will need to understanding and harness the emerging 21st Century ecologies of knowledges for the design and production of scaled value.

How Ethical Fields Can Support Your Community and Region

Ethical Fields supports regions in exploring, scoping and designing transition strategies that support the development of new economies that are suited to our 21st century challenges. We represent a team of thinkers and change agents, within a broader network of experts in various fields that can provide the necessary skills and knowledge to support economic and industrial transition.

Our approach to industry is underpinned by unique perspectives and knowledges. We are foremost “systems” thinkers, and we understand that contemporary challenges require an appreciation for nuance and complexity, as well as new tools and methods to do so. We draw inspiration from design philosophy which explores the impact of design decisions and perspectives on future sustainability. Any design process needs to be reflective of its own assumptions and it needs to incorporate foresight. Anticipatory Innovation is a foundation for strategy, as we are dealing with living systems, both human and non-human, which need to be nurtured and enhanced rather than being subject to short term extraction. The logic of the “commons”, that which we mutually depend on for our survival and wellbeing, also factors into economic transition strategies. This means building in the collaboration of all those that have a stake in a shared outcome and shared commons.

New solutions to transition our industries and economy and increase economic prosperity and wellbeing exist within our regions. We no longer need to rely on centralised, wasteful and external infrastructure. New technologies and approaches – including the circular economy, cosmo-localisation, distributed energy and digital transformation – offer new opportunities to reinvent our regions. We anticipate dramatic innovations and breakthroughs that will scale ethical and sustainable industry. We support regions in exploring, scoping, designing and implementing transition strategies that support the development of new industries and economies that are suited to the challenges and opportunities of the 21st century. We invite local councils, local development organisations, local people, community groups, organisations, businesses to collaborate with us to unearth your regional “superpowers”. For more information about how we can support you to capitalise on these opportunities visit our service offering page Here or contact us.

[1] Important to add that it was still experienced, but by indigenous and colonised peoples.